To mark the election of a new government in Greece, with the fresh hope this brings to the people, here’s a veganised dish which evokes happier times of abundance; moussaka. The stuff of 70s dinner parties, moussaka is actually known in different variations all over the Balkan peninsula, Turkey and the Middle East. Pondering on the ingredients and structure of modern Greek moussaka, I realised it is actually a kind of southern European shepherds’ pie; meat and veg on the bottom, potato on the top. Greek shepherds…hmmm… maybe a new name for this dish..? 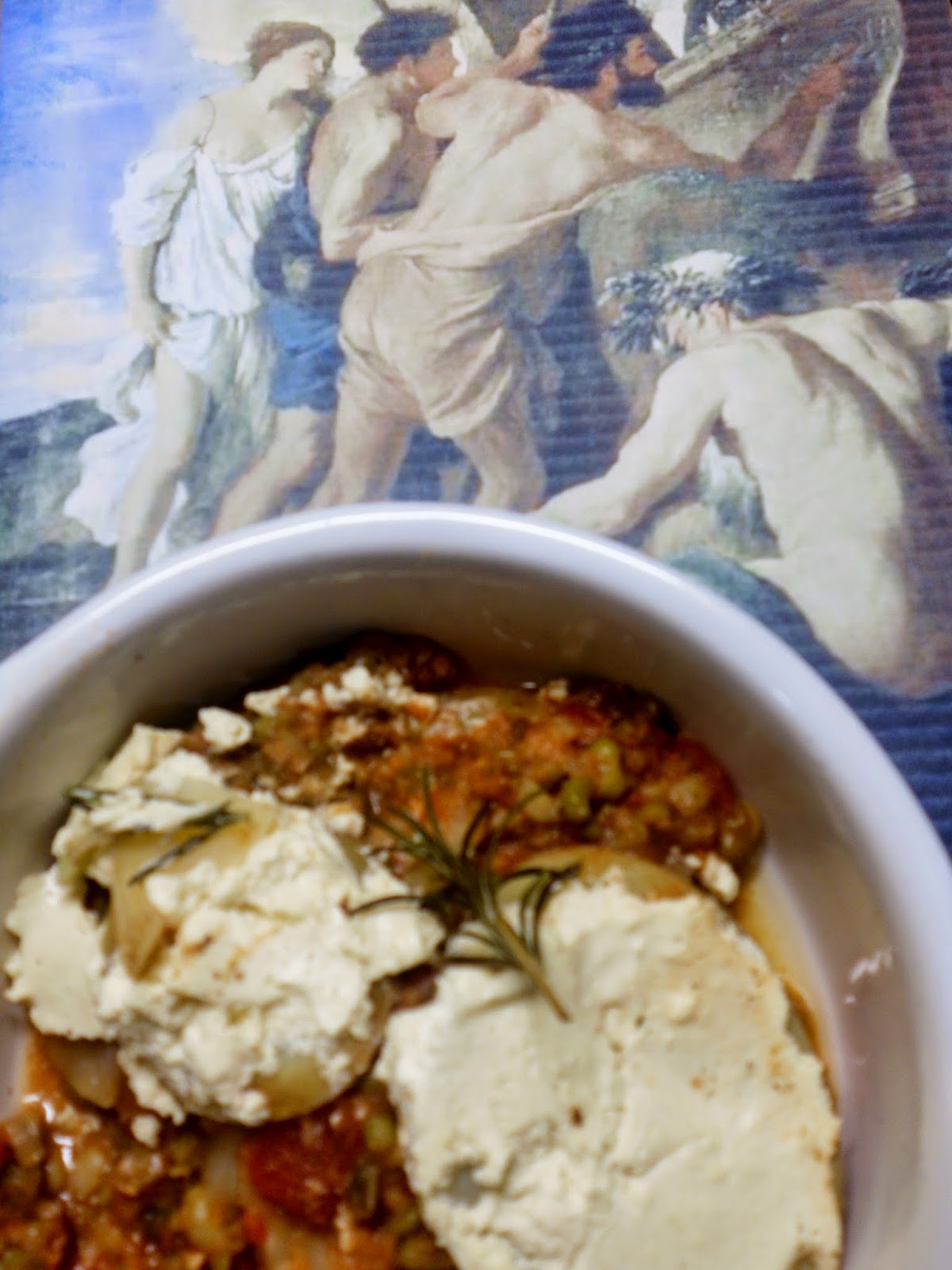 What’s the link between this painting and the moussaka? (The answer is at the end of the post.)


When you see the long list of ingredients and the instructions you may feel a little daunted: stick with us! It’s actually not that time consuming to make if you do everything in the right order and there are no fussy techniques like roux sauce to master. If you don’t have fresh rosemary, thyme or oregano would be brilliant instead, and even more Greek. If you want to make it soya free, then use our nut-based cheeze sauce for the topping instead of tofu and replace the miso with yeast extract if necessary. Despite all the mung beans it’s quite light and goes well with salad, and if you don’t fancy mung beans, green or puy lentils would be great too.

Serves about 8 large portions:
Custard:
tofu made with 2 litres of soya milk and drained but not pressed
600ml soya milk*
2 tabs yeast flakes
1/2 tsp seasalt
2 tabs lemon juice
*Try replacing some or all of this with live soya yoghurt; you may also need less lemon.

To assemble and cook:
some sprigs of fresh rosemary or thyme
1/2 tsp mixed spice and/ or nutmeg, allspice and cinnamon

Answer: For those of you who recognised the painting as the first version of Poussin’s “Les Bergeres d’Arcadie”,  (aka “Et in Arcadia Ego” or “Shepherds of Arcadia”) please note that this does not indicate some arcane, Da Vinci Code-style meaning in our post! Moussaka is Greek shepherds’ pie- get it?
Arcadia has always been seen as a pastoral idyll, a region of Peloponnesia known for its beautiful and fertile landscape. I like to think that all rural areas could one day be idyllic for animals too, if humans didn’t want to eat and exploit them. Maybe the shepherds in the painting are excited because now moussaka has gone vegan they have no more flocks to tend and they can now enjoy growing their own fruit and veg instead?!

What vegan dishes would you compare with what famous paintings?