Our allotment is full of the stuff, and it will be ready any day now; forced rhubarb has been creeping into the shops from Yorkshire (the rhubarb-growing centre of England) since January and those thick, pink and green stems which end in large, dramatically-crinkled leaves will no doubt be the pride of many a country produce show come early Summer- but what can we do with rhubarb, apart from crumbles, jam and compote with custard? Is it a fruit or is it a vegetable? And is it even worth eating this tart, oxalic acid-rich stem anyway? We have the answers here:

Rhubarb is a plant which originated in the cooler climes of China and Russia, cultivation subsequently spreading through Northern Europe and into Greece, Turkey and the Levant. Now it is also grown in North America. Only the stalks are edible, the leaves being too high in oxalic acid, which is toxic and can also cause kidney stones. (In fact, rhubarb stems picked in cold weather can also be too high in oxalic acid, so it’s not advisable to eat those either.) Rhubarb is technically a vegetable as the edible part is the stem, but is usually classified as a fruit since it is used like fruit.

In terms of medicinal use, rhubarb has laxative effects and it was for its therapeutic value that rhubarb was originally grown. It was not until sugar became more commonly available in the 17th century that people in Europe began cooking with rhubarb.

So if we do eat rhubarb, what benefits does it have? Rhubarb contains many vitamins and minerals, but those in nutritionally useful amounts (I reckon this as 10% or more of the recommended daily intake per 100g) are vitamin C, vitamin K, potassium and magnesium, with calcium very close at 9%. Contrary to popular belief, the stems are perfectly edible raw, though very tart. You may want to use rhubarb traditionally in jams, pies, crumbles or as a sweetened compote with custard, but bear in mind that it is probably healthier to use either gour (evaporated cane juice) or an alternative to cane sugar such as xylitol, stevia, coconut palm nectar or agave nectar.  Rhubarb, lemon plus a sweetener and water makes a refreshing cold drink. If you want to maximise the vitamins in your rhubarb, then eat it raw; one way of doing this is to dehydrate it into chewy chunks, infused with fruit juice to make it sweeter- watch this space to see how it turns out when we try it.

Rhubarb pairs well with orange and ginger; they detract from its acidity and add warmth. Here are some of our rhubarb recipes, both sweet and savoury:

A spicy condiment not for the faint-hearted! 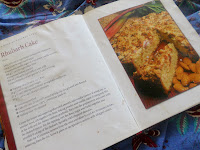