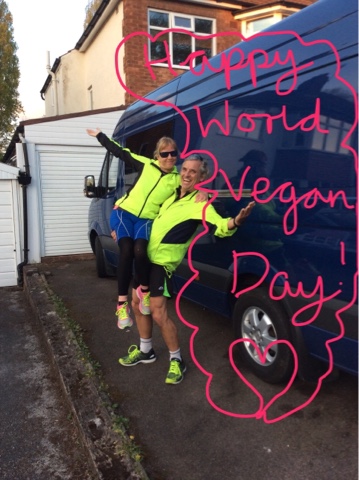 ..Lots of love from us, Nanda and Sarojini, at The Yogi Vegans ❤️

Being vegan has never been so easy in the UK -and many other countries around the world- as it is now. To celebrate World Vegan Day (and month) this year we thought we’d give you some vegan facts and figures plus links to some of our recipes which prove that as a vegan you are not going to miss out on your favourite dishes. There has never been a better time to take the Seven Day Vegan Challenge and a lot of people I know who tried it have just kept going because they feel so good. So whether you’re a new vegan, vegan-curious, or you just love the buzz you get from plant-based food, we hope you will find this inspiring and delicious reading… share the love!

If you’re not already vegan, you might think you know but there is actually some confusion about it, especially when it comes to the perceived difference between plant -based and vegan. I accept that our views are not the only valid ones but they do reflect those of many long-time “abolitionist” vegans. Let’s get a few common misconceptions out of the way first, before we get onto the

There are different reasons for becoming vegan, and we subscribe to all of them: That it is cruel to exploit animals, that it is ecologically better for the planet not to farm animals, that it would end world food injustice to use land for plants for feeding humans rather than farmed animals, and that it is better for our health to be vegan. By cultivating Veganism in ourselves we also cultivate our compassion for all life. To us, the only way forward for the planet is if as many humans as possible become vegan. It could literally save the world. I don’t want to get all preachy, but… seriously!

A piece of land the size of five football pitches when used  to pasture farm animals destined for slaughter or dairy farming can feed only two humans.  When this same piece of land is used for growing vegetable crops for human consumption it can feed up to 61 people. The amount of greenhouse gases produced by the meat and dairy industry worldwide is a staggering double that of plant-based farming. The amount of water used to farm animals is many times more than that taken by plant-based farming: one pound of meat costs 2,00 gallons of water as opposed to the 25 gallons it takes to produce one pound of wheat. Not to mention the alarming rate at which rainforests are still being cleared to provide pastures for farmed animals. A no-brainer isn’t it?- We think so.
Now for a few of the more controversial questions:

If you have a strictly plant-based diet but are still consuming animal products and animal-tested ingredients  in the other areas of your lifestyle, can you still call yourself a vegan? -Not in our book, according to the above definition of Veganism, and you are probably better to label yourself as following a “plant-based diet” But we would, never, ever disrespect anyone on a plant-based diet because that in itself is all kinds of awesome and a positive move for reasons including personal and planetary health.
Is palm oil a vegan choice? – It probably depends on your reasons for being vegan. In terms of animal welfare palm oil production scores very badly as forest ecosystems are destroyed in order to make way for the palm plantations. We have all seen those heart-rending pictures of dead orangutans. Intensive palm oil production is also highly exploitative of human labour. Palm oil isn’t even all that healthy for us to consume in quantity either as it contains 50% saturated fat. To us and many others this simply does not fit with vegan ethics so we try to avoid palm oil. If you eat a lot of processed food, such as pastry, cookies, etc. then you will be certainly eating palm oil. It is also hiding in shampoos and other toiletries as palmitate and other chemicals, even if they are marked as vegan. Not an easy choice to make. We had to give up all shop-bought biscuits, for example. We totally respect anyone who is finding this too difficult at the moment, and would simply encourage people to do what they can.
Is lab-grown meat vegan? – We don’t think so. Again, though, it might depend on your reasons for being vegan and whether or not you actually ever liked to eat meat. But meat is still meat, and so how can a diet including lab meat even be vegetarian, let alone vegan? Also, lab meat will have all the health drawbacks that animal meat has, plus possibly a few more that we don’t know about yet. And it’s really expensive to produce so hardly likely to solve any world hunger problems any time soon.

Now we’ve got the serious part of veganism all over and done with, we’ve collated a few recipe links here to show you that vegans are definitely not missing out on favourite dishes and flavours:
Vegan chocolate cake 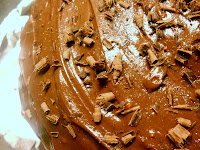 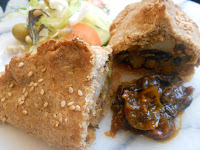 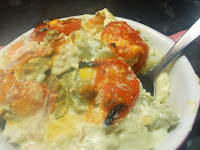 So this month, why not give yourself the gift of veganism- it’s a gift for the whole planet, too!

You get the last word!
What is your favourite veganised dish? How are you marking World Vegan Day and Month? What are your thoughts on any of the vegan questions we have discussed? Do you have any more questions? What other vegan recipes would you like to see featured on our blog? -Do use the comments section, as our readers really do help to shape what we publish.