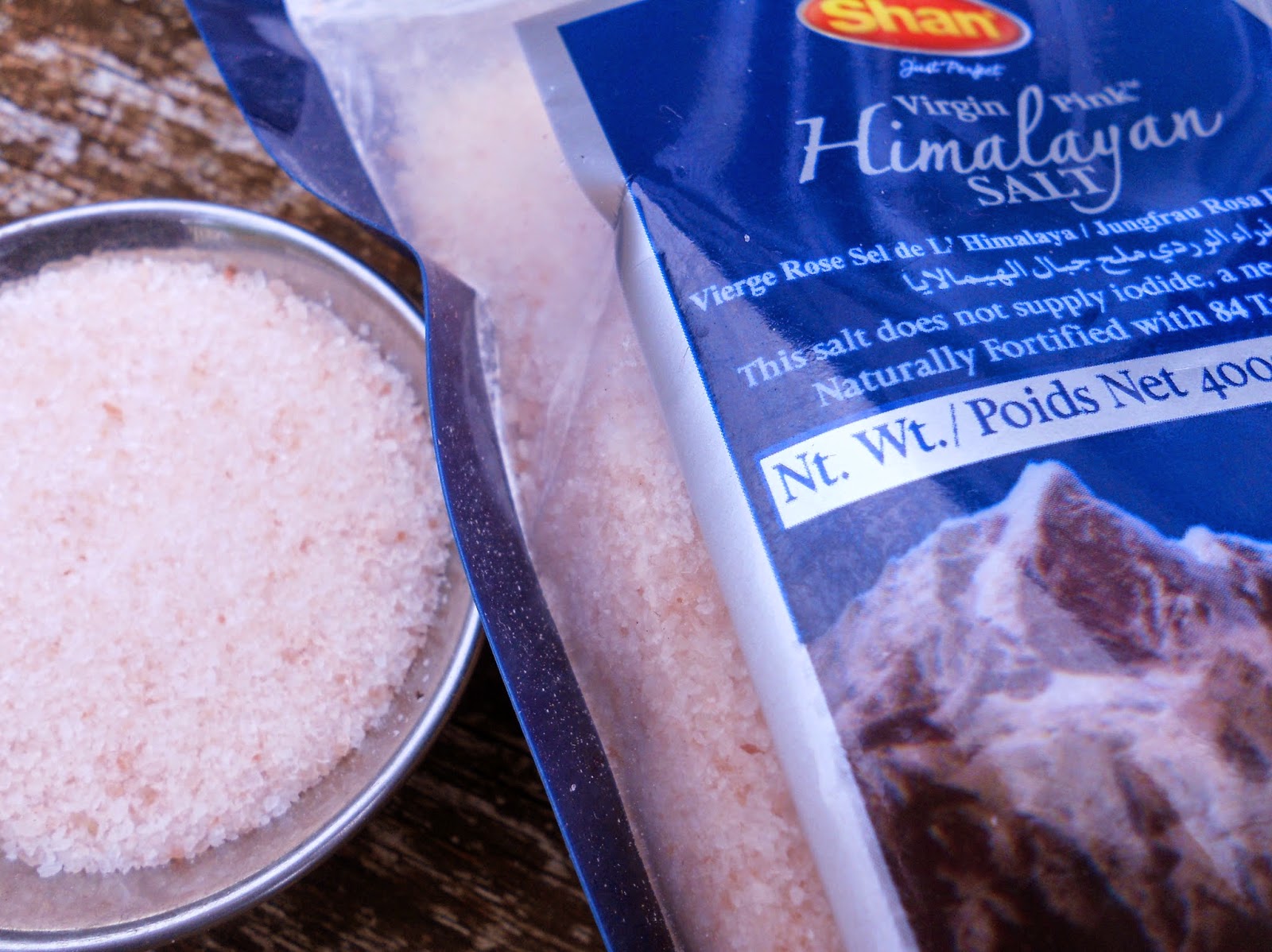 This month’s ingredient is one I’m sure a lot of you are already using, but I couldn’t resist sharing with you our bargain find. This brand of salt -Shan- came from an Asian grocery (East and West in Sparkhill, Birmingham) and cost an awesome 99p for 400g- way cheaper than if I had gone to a health food shop for it. Result! The main reason I’m so pleased about this is that now we can have this pretty pink condiment whenever we like, and benefit from its superior nutritional profile.
Himalayan pink salt (not to be confused with the sulfurous black salt which is also pinkish) is halite, or rock salt. It comes from the Khewra salt mine in Pakistan, in the foothills of the salt range, about 300km from the Himalayas proper. The pink colour is iron oxide, an indicator of its richness in minerals and trace elements As well being used in cooking, Himalayan salt can be heated and pressed into flat chunks and used as a chopping board and the large crystals can be made into lamps which give off a warm pink glow and are reputed to emit beneficial ions into the atmosphere once the salt becomes hot. You can also add mineral water to Himalayan salt to make a 1% solution called solay, which is beneficial for the circulation, lowers blood pressure and is even said to remove heavy metals from the body.
(But please note that studies have suggested that overuse of sodium chloride- which all types of culinary salt have as their major constituent, can result in high blood pressure. Some more recent data suggests that this is not true, but if blood pressure is an issue for you, it might be wise to use salt cautiously. Personally, I think that using natural salt in your cooking is absolutely fine- it’s chemical salt with its carcinogenic additives in processed foods that should be cut out.)
Why is Himalayan salt so good?
-Well its origin can give a few clues: it was covered by lava 250 million years ago, which sealed it off from pollution and is now surrounded by snow and ice, therefore it is considered pristine; the purest salt on Earth.
It also contains over 80 minerals and trace elements, at least ten of which are present in significant amounts (according to a German study). But what’s really amazing is that these minerals work synergistically, meaning that their sum benefit amounts to more than that of their parts; ie: they work together to become even more beneficial than if they were taken separately. Chemical analysis has shown that Himalayan pink salt is 85-95% sodium chloride- studies vary- and that the major minerals in it are magnesium, calcium, potassium and fluoride- not forgetting the iron that gives it its colour. There is also a very small amount of the poisons aluminium, arsenic and antimony but not in enough quantity to be considered a health risk. Because of its larger crystal structure, which means that each salt crystal takes up more space, there is proportionally less sodium in Himalayan salt than sea salt or other types of salt.
The benefits of Himalayan salt are said to be:

A word about iodine:  Himalayan salt does not contain this essential trace element, but then neither does sea salt, surprisingly enough. And iodised table salt contains other very harmful anti-caking agents so it should be avoided. If you don’t want to eat kelp (a seaweed) for iodine, then fennel, spinach and garlic contain a little iodine but you may still need to supplement.