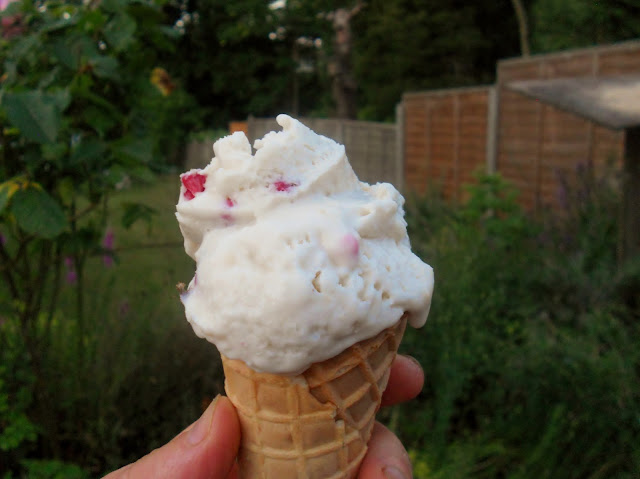 Ideally, this picture would have been shot against a background of white sand, flawless blue sea and azure sky. But you’ll have to make do with our garden just before dark because we live about as far away from the seaside as you can get in England. Never mind; perhaps the flavours in this ice cream will transport you to your favourite summer holiday destination anyway…
Since our last ice cream post (I think ice cream may now have overtaken cake as the most frequently-posted foodstuff on this blog!) I am delighted to announce that I have sourced a vegan waffle cone in Aldi, at £1 for ten. You can even get a chocolate-dipped version too! I still want to make up my own cone recipe, but for now I can serve up ice cream in cones with no fuss- and no bowls to wash up afterwards. I know from experience that if your ice cream mixture has too much of a water content from the fruit, then the result will be hard and icy rather than cool and creamy, so this is why I left the fruit in small pieces rather than blending it all in together. A little coconut cream and some ground cashews ensure a rich texture. Peach Melba., in case you were wondering, is a dessert named after the  19th century opera singer, Nellie Melba. It consists of peaches in raspberry sauce accompanied by vanilla ice cream. So why not just turn the whole thing into ice cream?

Why do I love the idea of ice cream so much? I think food is so much a shaper of memories, in the way smells and tastes remind us of  people, places and feelings from our past. For me, ice cream conjures up my seaside childhood in Weymouth. Ice cream was a rare treat for me, if my school report had been particularly good or we had visitors. At the time, there were ice cream parlours along the seafront, owned by Italian families who had settled there after the Second World War, and Fortes, a large and glossy cafe selling all manner of milkshakes, ice creams and desserts. That was the place I  looked forward to the most. Their knickerbocker glories were the best; a seemingly endless tall glass filled with layers of fruit, cream and ice cream topped with a fan wafer that you needed a special long-handled spoon to excavate. I usually managed to persuade my grandmother to buy me one at least once a year. Happy times!