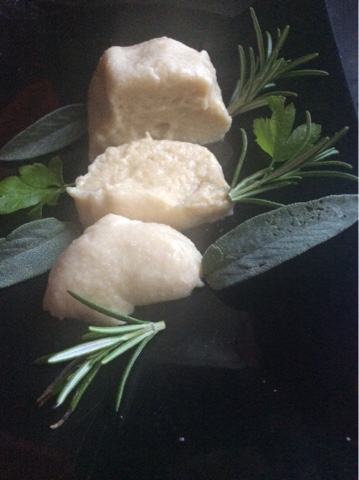 Are you, or anyone you know doing Veganuary? It’s a month-long, go-vegan challenge that’s been on for a few years now, and for those with an inclination to start the New Year off with a resolution, or who missed Vegan Month back in November, you can’t get better than this! There are so many simple and healthy vegan recipes online, vegan websites and Facebook support groups you can join, vegan products in mainstream supermarkets all over the world, and a plethora of vegan eateries, food trucks and pop-ups everywhere you look… going vegan has never been easier! – And going vegan has also never been more important, as more and more scientific research is pointing to animal farming as the cause of devastating pollution and environmental change worldwide; case in point the vast “dead zones” around coasts and in the oceans due to warming sea temperatures and animal waste run-off. This will have a huge negative impact on all species, including humans if it isn’t curtailed as soon as possible.
But getting back to the positive side of things, we thought we’d share with you a couple of our vegan cheese-making adventures, since cheese is one of those flavours and textures the newly-vegan (and also ex-cheese lovers like me who have been vegan for years!) miss the most. Since bought vegan cheeses are inevitably weird-tasting, nutritionally almost empty, really expensive, or all three of those things making your own plant-based cheeses should probably be on every vegan’s to- do list. To make it even simpler for our readers, I looked around the internet, where there is a bewildering array of cooked vegan cheese recipes. Sure, we have our own raw vegan soft/ sauce cheese recipes (see here and here for a couple of them), but every once in a while you might want a cheese you can slice or melt. Something you can make with ingredients you either already have or can get easily to use in sandwiches, pizzas etc. I narrowed down the possibilities and adapted three recipes to make two cheeses for just such uses. They are simple and fairly quick to make.
When I share with you my own memory of a past disappointment with home made vegan cheese back in the 80’s on my first venture into veganism, you’ll see why I’ve  bothered. In those days you couldn’t buy vegan cheeses anywhere, so I was super-excited to find a recipe for a sliceable vegan cheese. It was based on hard vegan kosher margarine, yeast extract and soya flour. I followed the instructions eagerly but the result was disappointingly grainy, oily and not much like cheese at all! Hungry and hopeful as I was, I had to throw it away. I want to make sure nobody else ever has to go through that…

My first foray into firmer, sliceable cheese was based on these two recipes:

I combined what I thought were the best bits of both, added some ideas of my own and came out with something that, although not grateable or truly melty, is semi-soft and slices fairly easily. I liked the cashews in the latter recipe rather than soya milk, but not the onion powder. Instead, I added hing and smoked paprika along with the tapioca starch from the first recipe. After blending, the mixture seemed too runny so there is more more agar* than in original recipe. *(Please note: agar is harvested from wild seaweeds, so sadly this cheese cannot be offered to Krishna as sea vegetables are not accepted.) It tastes a little bit Cheddar-y, a little bit double Gloucester-y and is fantastic with pickle and salad on crackers, as well as passable on a jacket potato. It makes quite a large block but will soon be snacked on! Here is the recipe: 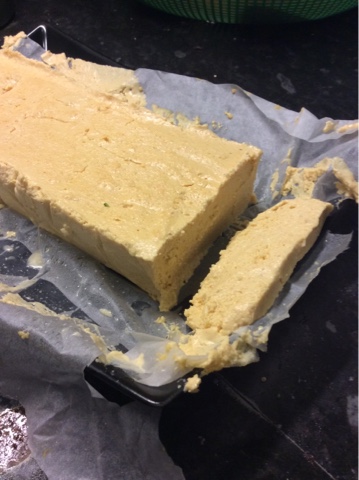 *Using coconut oil would probabaly give a more solid result, and you might not need the agar.


1. Put all the ingredients, except 1 cup water and the agar, in a blender until smooth. Set aside.

2. In a small saucepan, stir agar into 1 cup water. Cover, and heat over medium-high heat until           boiling. Reduce heat and simmer for about a minute. The liquid will thicken a bit.

3. As soon as it has thickened pour the agar liquid into the blender with the mixture and blend until thoroughly combined.

4. Line and oil a tin/ silicone mould. I used a loaf-style tin. Pour/ scrape the mixture into it and refrigerate until set.

Our verdict: Delicious flavour, but a little softer than expected. Next time I would use coconut oil and leave out the agar. Will also try soya milk and tapioca.

Cheese number two is a mozzarella-style cheese that’s based on cashews and tapioca. N actually had the idea for a stringy, tapioca-based cheese a couple of years ago, but neither of us actually got round to making it at the time. Here is the recipe on which I based my design:

My take on it is more of a Cheddar-mozzarella mashup; great on pizza. It came out of the blender thicker than expected- were the tabs of tapioca more like dsps in the original recipe?- so I added half a cup more water. I also  subbed 1 dsp miso for the nutritional yeast (I think that’s what gives it the Cheddar-y flavour and off-white colour) and added a further tablespoon of lemon juice.

This recipe makes a good quantity of mozarella balls: enough to top two large pizzas and have a few left over for sandwiches etc. Probably because I used miso rather than nutritional yeast, it has more a of Cheddar/ mozarella mashup kind of flavour. I always used to find mozzarella on its own too bland on pizzas, so this is perfect. 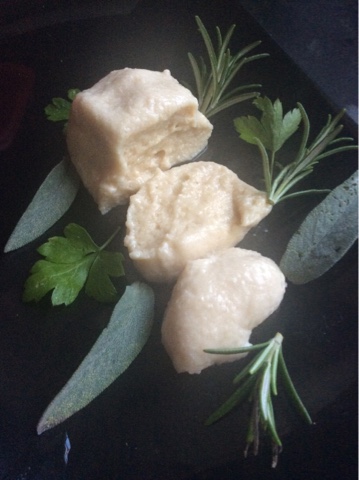