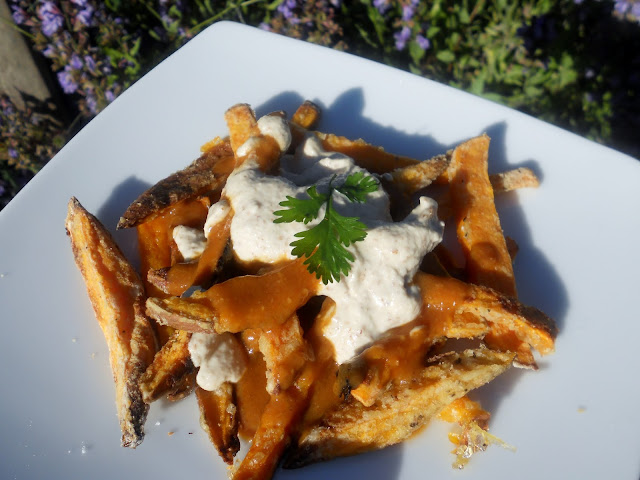 Koko’s Kitchen is a fantastic vegan blog from Canada that is often raw, super healthy and 100 percent delicious. Koko also runs her own fresh juice company. I’ve been a regular reader for some time now, and I don’t think I ever saw a recipe of hers that I didn’t absolutely love the sound of! The other day she posted a poutine recipe to celebrate Canada Day. (Poutine, fyi, is a traditional Canadian dish comprising chips (fries) in gravy with melted cheese on top. It was not the first time I’d seen it veganised, but  Koko’s lovely pictures and mouthwatering words made me decide once and for all to have a go at a Yogi Vegans version. I’ve used coated orange sweet potatoes for the baked “fries” and almond and tahini cheeze instead of cashew cheeze as we were out of cashews. I also omitted the garlic from the miso gravy. It’s not a fussy dish to make, and our recipe serves 2-3 as a main meal, 3-4 as a starter or snack. Scroll down below the next picture for the recipe: 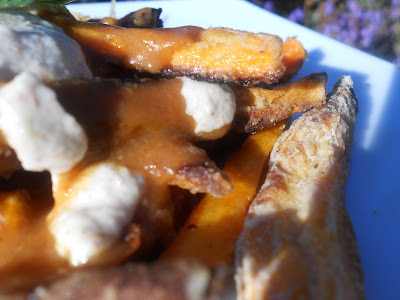 1 tab tamari sauce (optional; it does increase the saltiness)

Just pour gravy over the fries, top with the cheese and grill if you want. Garnish with curly or flat-leaved parsley, or even coriander, like I did.