Teff porridge, Snow and a Birthday

Yesterday morning, we woke up to this: 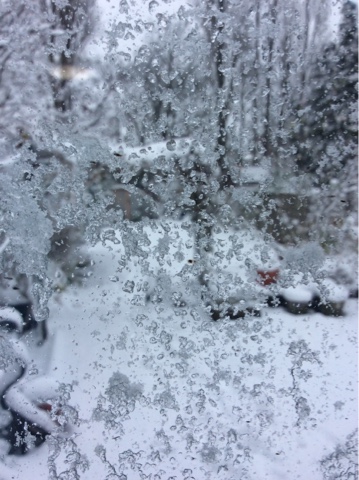 Now we don’t get snow here every single year, and when it does fall it either doesn’t settle or it turns to rain very quickly, so you have to understand that we were pretty excited… over six inches of crisp, white, sparkly snow and it continued to fall all day! In the afternoon, I received a text message saying the school where I work would be closed (in fact it is also closed tomorrow) so I settled down to enjoy a welcome break from routine. Before that, however, I tried a different kind of breakfast for the first time, while my husband N had a great idea for helping out the local bird population. Little birds can really struggle to survive in weather like this; they need to eat and drink to live but it costs them precious calories to go looking for food- and they need extra food to keep them warm. Most of the water they would drink is frozen, food on bird tables freezes and there are few berries or seeds left on the snow-laden plants. So what did N do? – He made a warm bird feeder from the tray of one of those heated plant propagators, put it on the bird table in the back garden, put some seeds and coconut oil in it and plugged it in. It took a little while for the birds to arrive as they were suspicious of the big, black box that had suddenly appeared on their scene but finally our first customer was a plucky little robin, who you can just about see below: 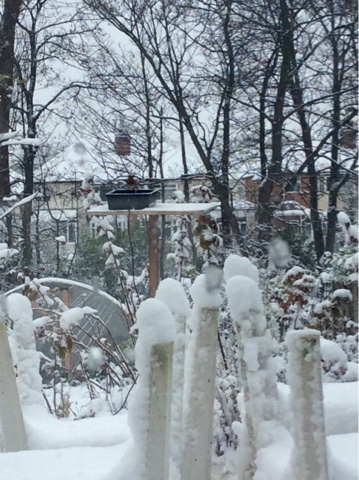 Moving on to today’s recipe: Teff is an ancient Ethiopian grain (well, seed technically). It is small, dark brown and very nutritious, containing significant amounts of protein, calcium, manganese and other vitamins and minerals, including iron, C and B6 as well as omega 3 and 6 oils. Being such a small grain, teff cooks quickly. What more could you possibly want in a breakfast food? I had heard that teff porridge is a tasty way to fuel up for the day, so I gave it a try. Now teff has a unique flavour; somewhat nutty and earthy, so I thought it would pair well with a mild, sweet fruit like banana. And then of course I had to add in maple syrup and a sprinkle of cinnamon once I had decided on the banana… the end result was delicious and satisfying. The mouthfeel of teff isn’t smooth and creamy like oatmeal but slightly grainy, but I actually prefer that. You can roast the grains to bring out the flavour even more, but I didn’t bother.

a drizzle of maple syrup

a sprinkle of cinnamon 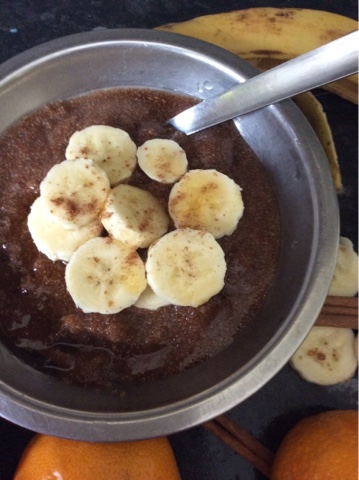 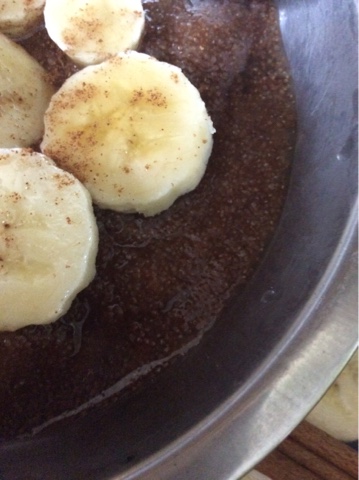 ..And as a postscript, here’s a picture of the cake I made for N’s birthday last Thursday, complete with marzipan dinosaur! It was a chocolate cake with fudge icing inside and for the blobs of mud. glittery blue icing for the waterfall and green coloured desiccated coconut completed the scene, along with chocolate-covered popcorn for the rocks. Fun, vegan but not very healthy!