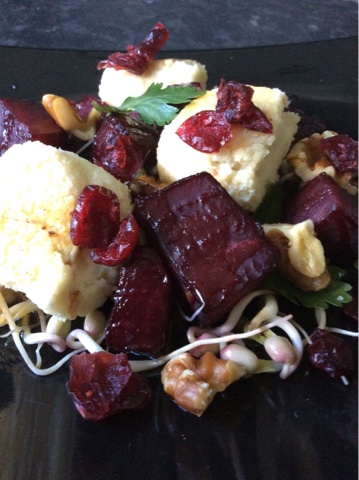 Are you thinking about Christmas/ the Winter festive season yet? I have to admit I love getting together with family to exchange presents and share food; and also having the luxury of spending more time in the kitchen preparing the vegan versions of all our favourite seasonal foods. This year, I have promised myself an early start in planning and preparation- because I’m usually the one who leaves making a complicated gingerbread house or the mince pies until late night on Christmas Eve! (Does that sound familair to anyone else out there?) 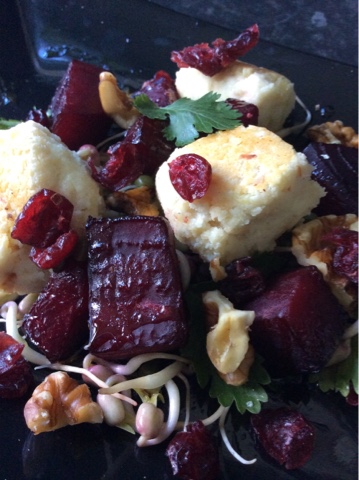 As a light meal or starter over the festive season , you can’t go far wrong with this salad. There’s  festive walnuts and cranberries with a dash of clementine’s citrus sweetness, sharp and salty almond feta and earthy beetroot. Flavoursome enough to be a treat but plenty of goodness in there as well. A chunk of warm, crusty bread would make a more filling meal (with the added bonus of being able to use it to mop up all the lovely dressing and feta crumbs.)

We served it on a bed of fresh mung sprouts and coriander leaves, but radicchio and frisée would also be perfect as their crisp bitterness would offset the sweeter berry and beet flavours beautifully. I happened to have some dried cranberries; you could go for fresh, or of they are too sharp for you go for pomegranate seeds or maybe even blueberries. This is not a quick recipe, though; take note of that if it is to be part of a multicourse meal. You can, however, make the feta in advance because that’s the part that takes the longest. Patiently skinning a bowl of soaked almonds is a labour of love. But when they are transformed into sharp, salty feta and warmed until slightly crisp at the edges…. trust me; it’s worth it! 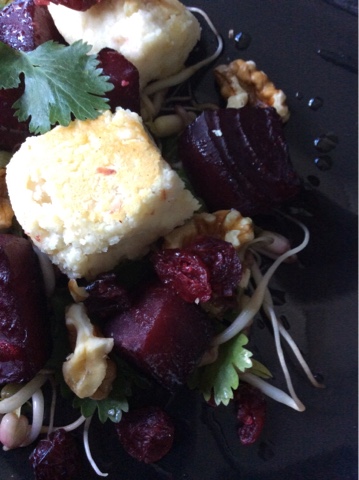 almond feta (see here for how to make it)

a handful of dried cranberries

a handful of coarsely chopped walnuts

salad leaves and/ or sprouts

a dash of soy/ tamari sauce

a pinch of raw sugar

... We haven’t decided what our Christmas dinner will be yet, but we will have Christmas cake, Christmas pudding and probably a batch or two of mince pies. What are your culinary plans for the upcoming holidays? What Christmas recipes would you like to see here?